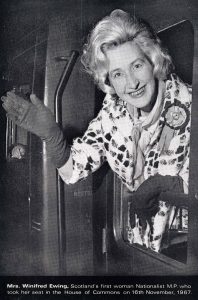 The world in 1967 had some striking parallels to now. Fifty years ago saw the UK apply to join the European Economic Community, the devaluation of the pound and the rise of constitutional politics in Scotland and Wales. The economy was in a different place as 1967 saw the launch of the QE2 liner at Clydebank and North Sea gas started to arrive in the UK for the first time. Culturally, 1967 was the year that the BBC started broadcasting in colour and it was also the summer of love in which Sergeant Pepper’s Lonely Hearts Club Band was released and headed to number 1 in the album charts.

In the world of politics, Harold Wilson was Prime Minister and led a Labour government with a majority of 98 following the snap general election of 1966 – sometimes snap elections work. However, his hold on power was about to face a new challenge in a town South East of Glasgow. Here Winifred Margaret Ewing appeared on the political scene in dramatic circumstances. Politics in Scotland and the UK did not return to normal after this event.

Winnie Ewing was elected as MP for Hamilton at a by-election on the 2nd November 1967. It launched her political career and catapulted the SNP into the public consciousness. The SNP had been increasing its support and profile since the early 1960s, with a huge growth in membership and local organization. This development slowly fed into electoral support as the party gained new voters and began to contest more parliamentary and local council seats. And then, boom, the party achieved overnight success in a by-election in a rock-solid Labour seat.

Across this decade of SNP growth, Ewing’s victory stands at the summit as her presence and personality reshaped the image of Scottish nationalism and gave it a new and effective voice. She was also one of the few politicians routinely referred to on first name terms – she was Winnie and also became Madame Eçosse, someone who built a career as a pro-European politician representing the Highlands and Islands and boosted the SNP’s profile internationally. She was part of the broad SNP leadership for decades, one of its most prominent campaigners, but never the leader or a government Minister.

There’s a video clip of Winnie Ewing on YouTube being carried shoulder high onto a train from Glasgow Central to London after the Hamilton by-election victory. Ewing’s ‘Tartan express’ almost exactly mirrored the trip by the Red Clydeside Independent Labour MPs of 1922 – her own father had cheered them off at the station, which tells us part of her own political background. The ILP MPs went down as a group of 10 and sat in a Labour parliamentary party of 142. Ewing went down alone and sat as a group of one. Like them she was trying to change politics and faced a hostile atmosphere. She faced it alone, as a relatively young politician with a family, so life at Westminster was far from easy. Some of her opponents were determined to make it a miserable experience too through bullying and harassment.

Ewing was a first time election candidate in a seat contested only once before by the SNP in 1959 –a lowly fourth place on 6.2% of the vote. Hamilton was solidly Labour and hardly a place the SNP expected success – though Ewing herself expected to win when adopted as the candidate. The Hamilton by-election came about because the sitting Labour MP – Tom Fraser – was appointed to chair the North of Scotland Hydro Electric Board. Labour had held the seat since 1918 and Fraser had won it at a by-election in 1942. Fraser’s last contest in the seat saw him win 71% of the vote in a two-party contest with the Conservatives at the 1966 general election.

Winne Ewing wasn’t the first SNP MP nor the first one elected at a by-election – that was Robert McIntyre in 1945. However, her election was more dramatic and also part of a general upsurge in support for Scottish nationalism in the 1960s that has persisted, with numerous peaks and troughs, ever since. Ewing spanned three distinct periods of growth in the 1960s, 1974 and 1999 but also managed to win her European Parliament seat during unpopular times for the SNP in 1979 and 1984.

What difference did Winnie Ewing’s victory make in 1967? First, it brought about what Tom Nairn called the ‘Return of Scotland’. The SNP came to prominence as an electoral threat that Labour and the Conservatives would need to take note of. The seriousness of the threat waxed and waned for several decades but in time it was to lead all political parties to emphasize their Scottish identity, Scottish policies and position on constitutional change. This situation has not gone away, quite the reverse.

Second, Ewing’s victory brought Scottish constitutional politics to life immediately and onto the agenda of the UK government and both main political parties. The Labour Prime Minister Harold Wilson responded to Hamilton by establishing the Royal Commission on the Constitution to examine the case for devolution across the UK, not just in Scotland. Wilson may have thought he was shelving Scottish nationalism by doing this, but subsequent events disproved this. And, Hamilton didn’t just lead Labour into considering the establishment of an elected Scottish assembly, it also led Ted Heath to commit the Conservatives to create an elected Assembly through his Declaration of Perth in 1968. Scotland and devolution were live issues from then on.

Third, Winnie Ewing was a woman. Back in 1967 women’s representation at Westminster was paltry. Only 26 female MPs were elected in 1966 across the whole United Kingdom. In Scotland, there were only 4 women MPs – Peggy Herbison, Alice Cullen, Berry Harvie-Anderson and Judith Hart. So, Ewing was part of a very small band of women MPs in both Scotland and the UK. However, she made Scottish nationalism look and sound different – female, educated, internationalist, charismatic and younger too, at 38 and with children.

Fourth, this was the start of a formidable political career for Ewing. She may have only held Hamilton until the 1970 general election but she was back at Westminster as the MP for Moray and Nairn from 1974-9, then MEP from 1975 to 1999 (which meant being elected and re-elected in hard political times for the SNP), before ending up as a regional list MSP in the Scottish Parliament from 1999 to 2003 and acting Presiding Officer at the ‘re-convening’ of the Scottish Parliament in Edinburgh in 1999. No one in the SNP has had such a long and varied career across three parliaments in such unique circumstances.